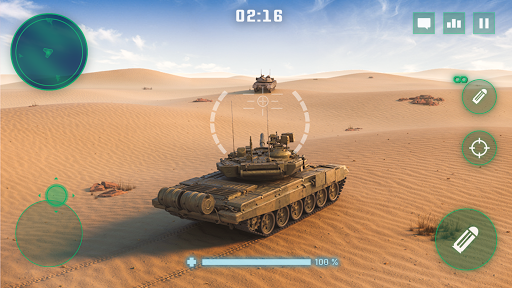 Battle tanks from all around the world, use your military tank to win the war, become the best tank commander in the world of battle stars.

FAST PACED SHOOTING GAME
3 minute action is what your tank has to shoot down as many tanks as you can in battle to win the war against world top stars.

DEFEND YOUR COUNTRY’S ARMY
Defend the honor of your country against army and tanks from foreign lands. Battle stars tanks from China, USA, Russia, Japan and all the world. A world of tanks in combat!

ICONIC TANKS
Choose your tank from a wide range of war machines and like in war make decisions to win the battle and be the star. Choose a light tank to fast scout the enemy’s territory and provide battle intel. Or take the heaviest of all, the Panzer, and free your military fury on the enemy in this battle world.

EPIC TANK UPGRADES
Unlock epic war tanks and upgrade it to become the star. Show your enemy who you are with tank customization. Are you ready to be the best of army games? Enter this world of war and be the star of your country!

Download now War Machines, the best free battle war game for free! Get your tank ready and battle in this world where only the best stars army survives the war!
Enhanced graphics and two new events coming soon: Golden Wars and Clan Consumable.