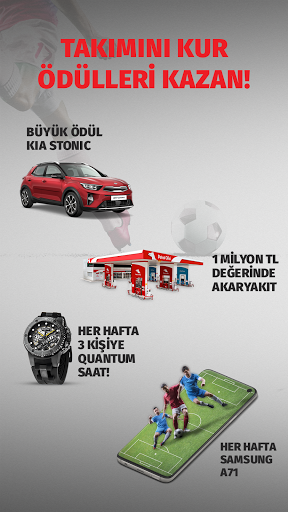 Petrol Ofisi Sosyal Lig APK Description: PO Social League Android App
Turkey’s largest fantasy football mobile app PO Social League offers you the opportunity to coach a club of soccer players based on their real-time performances while collecting points to win fascinating prizes. With the points you collect on the Social League Android app, you now have the chance to win numerous awards, from top model cars to the latest mobile phones. Discover the PO Social League now, create your own dream team and start winning!

It’s Your Time to Shine with Social League
Create a unique soccer team from your top Super League players, collect points based on their actual statistics and performances at weekly football games, and get one step closer to the weekly and annual prizes. A fantastic Kia Stonic, a Samsung A71 mobile phone, Quantum watches and free fuel from PO are some of fabulous prizes you can win via the football manager app. You too can be the next winner of the week with the points you collect according to the Social League scoring system, and savor the excitement of fantasy football!

How Do I Become a Member of the PO Social League?
The PO Social League app is completely free, allowing you to sign up in a few easy steps and start enjoying the thrill of the game. You can subscribe with either your Facebook account or e-mail address, decide upon your team name and start building your team. Experience the excitement of the Super League now in real-time action with the PO Social League score calculation system inspired by the current performances of the soccer players in the Turkish Super League.

How to Play Social League: The Basics
After completing your membership, you can start setting up your soccer team and make all the necessary adjustments for your squad from the Setup section. You can choose the field line-up you desire, place the players in the position of your choice, and add or remove players from your team. After you have determined your captain, you are ready to start your journey to championship. Remember that the points the player you choose as captain will bring is multiplied by 2!

About the Social League Point Scoring System
The scoring system will appear in two different rankings, as Weekly Classifications and General Classifications. Get the chance to win one of the amazing prizes by being the highest scorer of the week and or the season. While the winner of the week wins a top-nautch mobile phone, the winner of the season is rewarded with a top-model car. Don’t forget that you can claim a budget of 500,000 Euros to use in the game with each fuel purchase from PO worth 10 TL and more. Check out sosyallig.com for more details on budget increase, badge acquisition, game levels and team updates.

The scores of the sport players you choose for your team are calculated according to their performance in real-time games that will be played that week and are graded to the equivalent in the Social League point system. Scoring takes place after the last Super League match of the relevant league week. Published every Tuesday via the Social League mobile app, the Social League points are announced alongside the winning users. All that’s left for you is to enjoy the excitement of modern-day fanatical football!

Download the PO Social League Android app now and join soccer enthusiasts in real-time Super League thrill. For further questions, you can always contact us through [email protected], and follow our social media accounts for the latest news and immediate updates.

With the updates in this version, we activated a new V/max fuel award – winning game named as “Win With Me” for 4 matchweek.