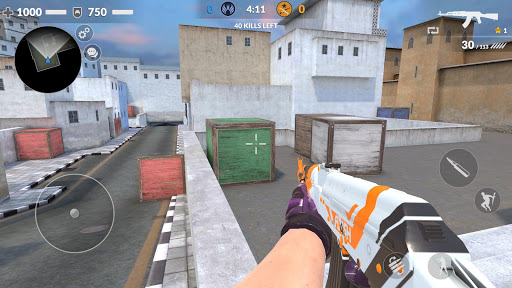 Play with friends or other players, you will love the shooting experience on your mobile device! It is FREE to play !
Compete with people around the world and show your skills.

GAME MODES
✪ Team Deathmatch ✪ Team vs Team battle (counter terrorist VS terrorist team)
✪ Free for all ✪ It’s kill or be killed. Kill the other players as many times as you can.
✪ Defuse the Bomb ✪ Terrorist team plant the bomb. Counter team defuse the bomb.
✪ Private room ✪ Call your friends to play together in same room.
✪ Custom Match ✪ Create your own games (create any game maps/rules)

This year’s best graphics 3D First Person Shooter experience will make you spend your time playing Critical Strike!
If you are dead don’t forget where you get hit for counter attack get your revenge!
Join the competitive combat in the most skill-based portable FPS!
If you always wanted to play a great multiplayer shooter on your mobile device, your dreams are now true!
You can enjoy the improved graphics and enticing sound effects of this free online games!
Are you ready to strike counter enemies?
Awesome Multiplayer FPS CS game GO!
First person shooter and multiplayer shooting game made with Unity to optimize online FPS gun experience.
Regular game updates and new elements are waiting for you!
Download now and join the Critical Strike community!
Helmets and new armor items for customization!?
Global chat to socialize with all CS players! ?
Arms Race Event with limited time leaderboards and star road rewards! ⚔️
Antalya Map with new improvements! ?
Damage texts to show amount of damage you give! ?
New missions to complete every day! ?️
? We are ready to make your game experience even better! Enjoy it!?
Facebook page: http://facebook.com/criticalstrikegame
Discord: https://discord.gg/8EuAMRR