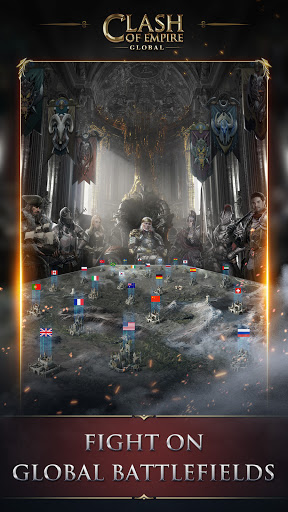 Clash of Empire: New Empire Age APK Description: Do you want to fight side by side with your friends on the global battlefield? Are you good at defending the castle or taking the initiative? Do you have a strategy to win more with less? Do you have the wisdom to develop empire civilization to its peak? Do you even want to become the king of conquering the world through great battles? Join Clash of Empire and discover more surprises!

★Legendary heroes help you conquer the world!
Alexander! Genghis Khan! Caesar! Joan! …The legendary heroes praised by the people of all countries are waiting for your recruitment! Heroes emerge in troubled times, and write your own legend under the witness of legendary heroes!

★Free construction, castle development strategy is up to you!
The first creation is to set up workers to freely distribute gameplay, bid farewell to boring fixed queues. Is it concentrated workers to upgrade the castle? Or is it scattered workers to fully reclaim farmland? The strategy of building a highly free castle is up to you!

★The artifact is coming, collect artifacts to help you!
Original artifact collection and plundering gameplay. The sword of Tyrael, Aegis, the Trojan horse… the legendary artifacts descended on this world. Go to find them. Of course you also need to protect it from the enemy!

★Magic mine, get rich in resources overnight!
Original alliance resource investment gameplay, put all your resources into the magic mine! Keep it and you can get more than 300% return! Exciting battle is on the verge!

★Occupy the resource tower and make you stronger as you fight!
Original resource tower occupation gameplay, want to claim the throne? You first need to get a place in the resource tower, a steady stream of additional war resources and powerful attribute gains will allow you to maintain an advantage in the final battle!

★Fight for the throne, for glory and power!
Once you succeed, you will need to defeat all enemy empires on your way to the pinnacle of power to ascend to the highest throne that symbolizes glory and power!

>>When you encounter any problems, you can submit feedback to our customer service system through the in-game help center (the entrance is next to the castle wall).